The pilot project from UvA’s 4D Research Lab sheds light on the Vlooienburg neighbourhood.  It is based on the research of an NWO project ‘Diaspora and Identity,’ of which James Symonds – professor of historical archeology – and Jerzy Gawronski – professor of maritime and urban archeology of the late Middle Ages and the early modern period – are the initiators.

The project is a 3D reconstruction of Vlooienburg, what is now the Waterloopleinbuurt, made by the UvA’s 4D Research Lab. In it you can see three different historical periods: from around 1625, 1675 and 1890. The excavations from 1980 can also be seen. You can also take a look at a typical dining room of a Portuguese-Jewish family from around 1650. The reconstructions have been produced on the basis of extensive cartographic, archaeological, and architecture-historical research by a team of archaeologists and 3D modellers and technicians, in close collaboration with experts in various domains of the cultural history of the area. Since the neighbourhood doesn’t exist anymore, and very few traces in the current urban layout of the area are visible, 3D/VR is the only way to create an experience of revisiting the area.

The digital reconstructions will greatly contribute to the understanding of Vlooienburg, both archaeologically as well as visually. These virtual models will not only serve scholarship but will also inform the wider public, from all over the world, interested in Jewish Amsterdam, and will be part of the future exhibition in the Jewish Historical Museum. 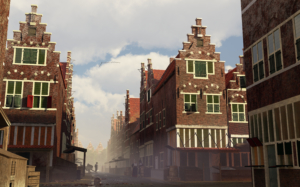 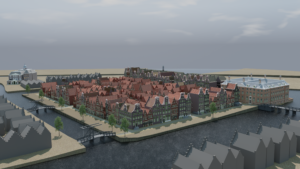 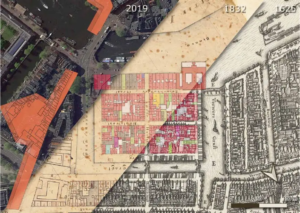