The central focus point for the pilot project is Maastricht’s claustral belt where there are two churches with a former graveyard in the middle. This claustral belt was the domain of the religious chapter of Our Lady, which goes back a thousand years. The houses still stand, but since the French overtook Maastricht in 1795, the religious chapters were forbidden and abolished, so the chapter members were forced to leave their houses. These town-palaces often still have their old grandeur. One of the two original churches has disappeared (the Saint Nicolas church was torn down in 1838), so the square looks much different from the period during which it flourished until a little more than two centuries ago. The remaining church of Our Lady (ca. 1000/1100 AD) stands on the corner of the former Roman military fortress.In this immediate area the roots of Maastricht lie hidden, deeply buried under many meters of deposit, which grew intensely because of two millennia of local activity.

A 3D representation of this underappreciated area of Maastricht will allow people to experience the deep history of this location in addition to the traditional 2D publication methods. Instead, 3D helps to visualize the stories we want to tell in a way that is also a form of interaction. Our goals of the pilot project are to ignite the interest of the people who use the Square of Our Lady (Onze Lieve Vrouweplein) in the centre of old Maastricht by sharing with them stories about the people who once lived there and the stories that took place. 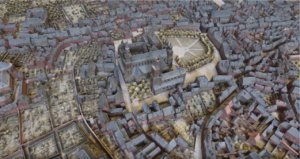